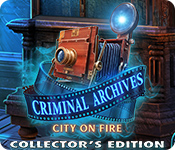 Domini Games brings you a new riveting series in Criminal Archives: City on Fire! When a string of mysterious murders leaves police in San Francisco stumped, only a crime reporter of your caliber can shed light on the case. A masked criminal calling themselves the Plague Doctor is committing arsons throughout the city in the name of justice. But who and why remains to be discovered. Along with your partner, you’ll plunge into a world of lies, corruption, and deception for your most compelling article yet. Can you uncover who’s behind the mask and stop him before the city’s consumed in flames? Find out in this gripping Hidden-Object Puzzle Adventure! This is a special Collector's Edition release full of exclusive extras you won’t find in the standard version. As a bonus, Collector's Edition purchases count toward three stamps on your Monthly Game Club Punch Card! The Collector’s Edition includes: