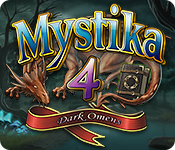 The next exciting adventure in the Mystika series is here! Sarel, a power-hungry dragon has stolen a tome known as "Dark Omens" and has triggered an ancient inter-dimensional portal to form north of Lumina. A new cadre of evil creatures now invades the world! Help Alrik and Tenebria seal this gate! Explore the world of Lumina through 160 magical levels and defeat your enemies with powerful spells as you try to restore the balance between Light and Shadow. Only the two bravest magicians can save the world...